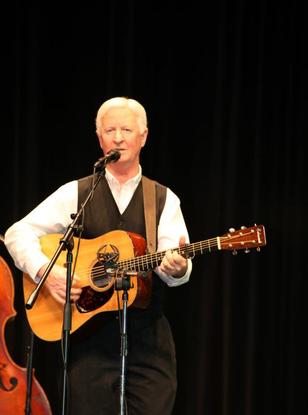 Johnny Williams 2 solo projects on Mountain Roads Recordings "Going My Way"  recorded at Eastwood Studios with Wesley Easter it features the great talents of Jeanette Williams-bass/vocals, Nikki Wright-Fiddle/vocals, Jason Davis-Banjo and Chase Johner-Mandolin. It has six of my original songs and six songs from different types of music that I like to sing. I think this is my best effort yet!

To order go to:

[Going My Way - Johnny Williams] When the top traditional bluegrass singers are named, you expect to hear Larry Sparks mentioned, and James King. Perhaps Danny Paisley as well, and Junior Sisk. But a name you don’t hear often enough is Johnny Williams, who can throw down the lonesome with the very best of them.
There is sufficient evidence of that contention to convince anyone with ears on Williams’ latest album, Going My Way, on Mountain Roads Recordings. To my ears, it’s his best to date, and a serious contender to be considered among the best traditional bluegrass albums of the year.
Part of the reason is Williams’ doleful singing voice, which can take any song and give it a forlorn feel. Even his version of the Kansas mega-hit, Dust In The Wind, sounds here like a mountain ballad.
Part is his brilliant songwriting. I’ve had occasion to note in the past just how difficult it is to compose a new song that fits in the bluegrass or mountain music tradition so authentically that you could be forgiven for believing it to be 60 years old. This album opens with a perfect example on Johnny’s Sailor’s Regret, a truly lonesome story of an old man at sea.
Another part is the strong ensemble assembled to cut this project. The personnel is the same for every song, giving a legitimate band feel to the whole album. Jason Davis is on banjo, gnawing on each and every track as is his wont, driving the music forward with every beat. Chase Johner provides the mandolin, which is always note perfect. He dusts off his best Dempsey Young to kick off Ease My Worried Mind, another Williams original.
Jeanette Williams provides bass, but is only one of Johnny’s vocal duet partners on Going My Way. Nikki Wright, who also plays fiddle pairs up with him on several of the tracks, including his Stanley-esque What You Gonna Do.
Other notable cuts include Johnny and Jeanette singing a grassified version of Talking To The Moon, a hit for The Gatlin Brothers in 1986, Albert Brumley’s The Prettiest Flowers, and John Pennell’s Dark Skies, previously recorded by Alison Krauss.
Going My Way is a very strong project, sure to please anyone who favors the lonesome side of old time bluegrass. It is available on CD or download from the Mountain Roads Recordings site, and to DJs via Airplay Direct.

John LawlessJohn had served as primary author and editor for The Bluegrass Blog from its launch in 2006 until being folded into Bluegrass Today in September of 2011. He continues in that capacity here, managing a strong team of columnists and correspondents.

 JOHNNY WILLIAMS
GOING MY WAY
Mountain Road Recordings
MRR-1021
Johnny Williams’ most distinctive work on this, his second solo release on Mountain Road, comes in bunches—three separate bunches. The tracks in between are fine. Those in the bunches stay with you.
At track three, begins the first bunch. You can feel the shift immediately. Where his two opening tunes, both original, are pleasant enough, if somewhat ordinary in design and presentation, “Talking To The Moon,” a pop/country tune from Larry Gatlin, has a fresh melodicism that is instantly engaging. The melody line descends lightly, and Williams swings into it with his buttery and rich vocal style. He follows that by revisiting one of his own songs, “What You Gonna Do.” The drive and the lyrics are a great hook. Up next is the slow country of “Eleven Roses,” a song tailor-made for Williams’ range and delivery.
Skip ahead to track seven, “Dust In The Wind,” a big hit for the rock group Kansas. Williams manages to transform it into a wistful, mountain-tinged ballad while retaining the song’s distinctive conception. Hearing it performed bluegrass-style is one of those “of course” moments. Give Williams credit for recognizing that and for a great performance. A lovely reading of “The Prettiest Flowers” is next. It’s hard to go wrong with an Alfred Brumley gospel and Williams doesn’t.
Nor does he go wrong with the last bunch, his own “Ease My Worried Mind,” which walks the fine line between country and swing, followed by his up-tempo arrangement of “You Live In A World All Your Own.” Both of those send this recording out on solid footing. Backing Williams are his wife Jeanette on bass and vocals, fiddler/vocalist Nicki Wright, mandolinist Chase Johner, and banjoist Jason Davis. (Mountain Roads Recordings, 3192 Hwy. 421, Bristol, TN 37620, www.mountainroadsrecordings.com.)BW

Johnny Williams  is a finalist for 2020 SPBGMA Songwriter and Guitar Player of the Year !

Larry Cordle has a new single out to radio today, a seafaring song

written by his old pal and fellow singer/songwriter, Johnny Williams.
It’s called Sailor’s Regret, and tells the story of a mariner who fears he’ll never see his home again. Cord says he liked it right away for his upcoming album.
“My friend Johnny Williams wrote this great song. My good buddy, band mate and banjo player extraordinaire, Jody King, suggested it to me when I was gathering songs for this new album. Being a former Navy guy myself, I just loved the tale. The longing for home when I was overseas, sometimes nearly unbearable, coupled with the great drive Johnny put into this piece made it a no brainer for me to cut. Thank you old buddy for allowing me to record this song!” (Larry Cordle)

Johnny Williams’ lead vocals have a dynamic force and magnetic charm that reveal a natural inclination for honest, sincere messages in his original songs. Johnny is an award winning singer and songwriter from Virginia. He took first place in the bluegrass division of the Chris Austin Songwriting Contest at Merlefest in 1998 and 1999. Besides with The Jeanette Williams Band, Johnny’s songs have been recorded by Junior Sisk and Rambler's Choice, Larry Cordle, Larry Stephenson, Honi Deaton & Dream, Mountain Faith, Doyle Lawson and Special Consensus to name a few.
Joe Ross, Bluegrass Reviewer

After several listenings to him the one recurring observation I had is that Johnny Williams is ‘the real deal’. His voice can sound like the most traditional bluegrass singer or have the cry of the most respected old time country singer, and his strong rhythm guitar playing is the glue that holds the performances together.
Greg Cahill, Special Consensus

When the top traditional bluegrass singers are named, you expect to hear Larry Sparks mentioned, and James King. Perhaps Danny Paisley as well, and Junior Sisk. But a name you don’t hear often enough is Johnny Williams, who can throw down the lonesome with the very best of them.

have a new project "So Much Time, So Much Love" soon to be

​released March 2022 on Grass Tank Music. A collection of a

variety of genres of music with special guest Nikki Wright,

Order now from this site or call

HOW LONG HAS IT BEEN

TAKE ME BACK HOME

THE ONE I LEFT BEHIND

GONE FOR SO LONG

JOHNNY  & JEANETTE WILLIAMS/Thirty Years Later:  A singing bluegrass duo that’s kept it simple, direct and heartfelt all these years has been racking up the recognition almost under the radar all this time.  Hitting that sweet spot where their sound is traditional but has no dust on it, it’s the kind of stuff you could listen to over and over all night long and wonder where the time went when you weren’t looking.  Just plain tasty, I think I see some more awards coming their way in short order.​

Johnny & Jeanette Williams, Thirty Years Later (Williams 2018) Jeanette Williams has not received the notice she deserves as a top-level vocalist, her voice gliding effortlessly above the music while capturing the meaning of the words. Although Johnny has long been respected as a songwriter, Thirty Years Later only contains one song by each, drawing on a slew of strong writers plus a Jim Eanes cover. Musicians include some of the region’s best including Jody King and Scott Freeman. (County Sales, 2019)